Where Roofing and Waterproofing Become Synonimos

Austin Roofing and WaterproofingAbout Us
About Us Admin October 24, 2014 September 25, 2019

About Austin Roofing and Waterproofing

Our certified Triton applicators provide common-sense solutions to deliver the highest level of protection against water, chemicals, and environmental fluctuations. The innovative line of Triton's proprietary seamless rubber membrane systems are formulated for many types of roofs, walls, decks, below-grade surfaces, and a wide range of specialty applications. We excel at waterproofing to eliminate wasteful and disruptive roof tear-offs with a safe, odorless application. Our Triton line of products are water-based, environmentally safe, and sustainable for generations, and have been installed on millions and millions of square feet.

Why choose Austin’s Team of Seamless Roofing and Waterproofing Experts?

Austin Roofing & Waterproofing can provide an expert evaluation of your waterproofing and needs and provide a complete seamless membrane solution making your substrates watertight and more durable than the first day it was installed.

We specialize in flat roof repair and restoration on commercial and industrial buildings in Ontario. Our seamless roofing systems can be installed on top of any flat roof or slightly pitched surfaces. Your existing building may have one of the following roof membranes: single-ply (EPDM, TPO, PVC), Embedded Gravel (rock), metal, or built-up (asphalt, modified bitumen).

Our extreme weather conditions in Ontario causes thermal shock (expansion and contraction caused by UV radiation). This will cause these roof substrates to stretch or sag at the seams, along the edges and around protruding stacks, pipes and HVAC units. Ponding water is the byproduct of thermal shock and the main contributor to leaks in the membrane.

Get a FREE Roof Evaluation Today – Don’t Wait for a Leak!

Austin Roofing & Waterproofing wants to be the last roofing contractor you will ever need to call. We use high-quality, proven seamless membranes that are backed by an all-inclusive, materials and labor warranty for up to 40 years.

OUR SERVICE AREA IS GROWING!

What Our Customers Say…

“The Team went above and beyond to localize the issue and repair it.”

"The white roof is very reflective... we have already noticed a difference with indoor room temperature with our new cool roof."

"At Windsor Christian Fellowship we had many issues with our metal roof. We were constantly trying to seal the perforated seams for the HVAV units, but these repairs would only last until we had temperature changes. We contacted Austin Roofing and felt that their rubber membrane would be a better solution than replacement with another metal roof. We had them do a section of the roof and it worked perfectly. Their workmanship was excellent, and they went above and beyond for us."

"I am writing to recommend the services of Austin Roofing and Waterproofing. Throughout the past 6 to 8 months we have had several services performed by them at all of our facilities. Services included all flat roof repairs, drainage, inspections, and complete facility 100 point inspections. They were professional and attentive and responded quickly to our issues with leaking roofs."

"On behalf of Chatham Towing Services Ltd, we would like to start off by saying how impressed we were with the quality of workmanship Austin Roofing & Waterproofing has provided. Over the course of the past few years, the steel roof on our building has been leaking and nothing but headaches trying to resolve. When we contacted Austin Roofing & Waterproofing, Patrick came out and thoroughly went through the entire process of what was needed to resolve and restore our buildings roof and we couldn’t be more impressed with the outcome. Not only did Patrick solve our issues, but the roof looks amazing."

"Austin Roofing and Waterproofing just recently did a job at our Essex Location and we cannot be more pleased with the work. Patrick did a very thorough investigation to where the problem was coming from and did not stop short from making sure the problem was corrected. His men are also very friendly and provided amazing customer service. We would recommend Austin Roofing and Waterproofing, they are professional and attentive to every last detail."

In memory of my dear wife Mary.
She was a loving mother to Christopher and Patrick and is greatly missed by her family and friends. Mary was a schoolteacher at Stella Maris School in Amherstberg, ON  and was respected by many in the community.

Austin Roofing is what it is today as Mary played an instrumental role in the creation of the company.

A Picture of You

I only have a picture now.
A frozen piece of time
to remind me of how it was,
when you were here, and mine.
I see your smiling eyes,
each morning when I wake,
I talk to you, and place a kiss,
upon your lovely face.
How much I miss you being here,
I really cannot say.
The ache is deep inside my heart,
and never goes away.
I hear it mentioned often
that time will heal the pain,
but if I'm being honest
I hope it will remain.
I need to feel you constantly,
to get me through the day.
I loved you so very much!
Why did you go away?
The angels came and took you;
that really wasn't fair.
I wasn't even with you,
I wished that I was there.
If only they had asked me,
If I would've taken your place.
I would have done so willingly,
leaving you this world to grace.
You should have had so many years
to watch your life unfold,
and in the midst of this,
Watch me, your Dad and Brother grow old!
I hope you're watching from above
at the daily tasks I do,
and let there be no doubt at all,
I really do love you!
Forever missed by Dad and Patrick. 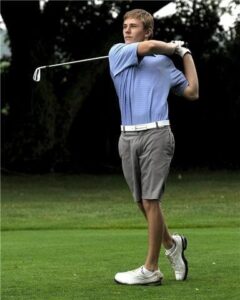 In loving memory of my  beloved son and
the big brother of Patrick.
Christopher, was one year away from completing a degree at
Michigan’s Madonna University on a golf scholarship. 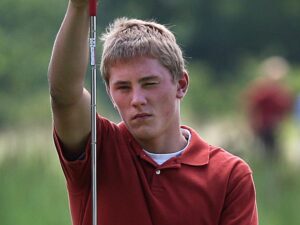 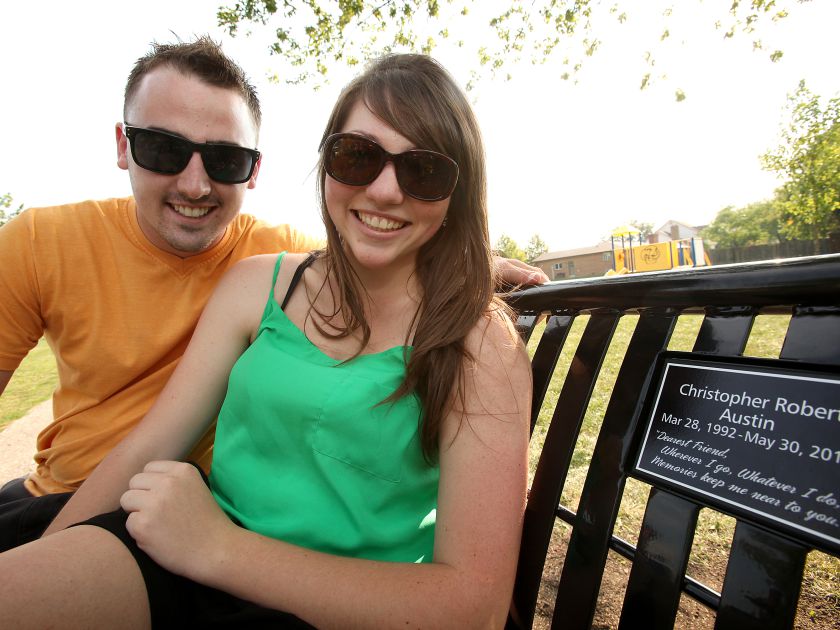 AMHERSTBURG, ONT: Ryan Lee and Michelle Pelaccia sit on a bench they raised money for to purchase in memory of their childhood friend at a park behind St. Joseph Parish Sunday, August 26 in River Canard. Christopher Austin, 20, was killed in a tragic boating accident in May. The bench is situated by the elementary and high school Austin attended and where his family lives.

Months after losing a lifelong friend to a tragic boating accident, friends of Christopher Austin – still reeling with sorrow – found a way to honour the young man they say “treated everyone like gold.”

“There was just this hanging grief and I know everybody felt it just as strong as I did,” said Michelle Pelaccia, 20, a friend of Austin’s since kindergarten who came up with the idea of purchasing a park bench in his memory.

“I think coming together for something for him and finally having it in one spot where we can all go to was sort of a piece of closure that we can all get.”

Austin, 20, who was one year away from completing a business degree at Michigan’s Madonna University on a golf scholarship, was operating a personal watercraft when it was involved in a collision with a 38-foot cigarette boat in Livingstone Channel, in the Detroit River near Boblo Island.

Austin was taken with life-threatening injuries to Detroit Receiving Hospital, where he fought for his life for three days until he died May 30 surrounded by friends and family.

The bench was placed near Austin’s grade school, high school and home – a spot his friends say is central to their cherished memories of the athlete. A plaque on the bench includes Austin’s name and says “Wherever I go, whatever I do, memories keep me near to you.”

“Isn’t that beautiful,” Austin’s grandmother Ethel said after she read it while fighting back tears.

“When I heard I was just thrilled to think these kids did this. It’s just so sweet,” Ethel said. “I was really touched by that. When I visit that’s where I will sit.”

The family was overwhelmed.

“We’ve been heartbroken over this. It’s just so hard to understand,” said Austin’s aunt, Diane Loebach.

“We thought this was wonderful. It just goes to show what young people can put their minds to. He really was loved … It will be a nice place to come and reflect.”

About 50 people gathered Sunday, including Austin’s friends and Madonna golf coach and team. This year the team’s uniform, which they showed up wearing, have the initials CA stitched onto the lapels.

“You just knew he was one of those students,” said coach Steven Mato. “When you met him he made a great first impression. He had a passion for golf and (showed) great character.”

Pelaccia and Ryan Lee, another childhood friend, raised more than $2,000, surpassing their goal of $1,500, to cover the expense of the bench. They intend to use the leftover funds, donated by local businesses and friends, to purchase another memorial plaque at Pointe West Golf Club where Austin frequently played.

Cathy Thoman, Austin’s aunt, said the family was touched and wanted to thank everyone for their support.

“He treated everyone like gold,” Pelaccia said. “His smile and his laugh are two things that I can’t get out of my head.” 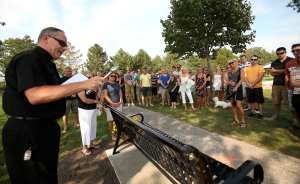 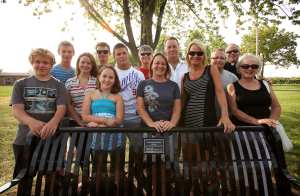